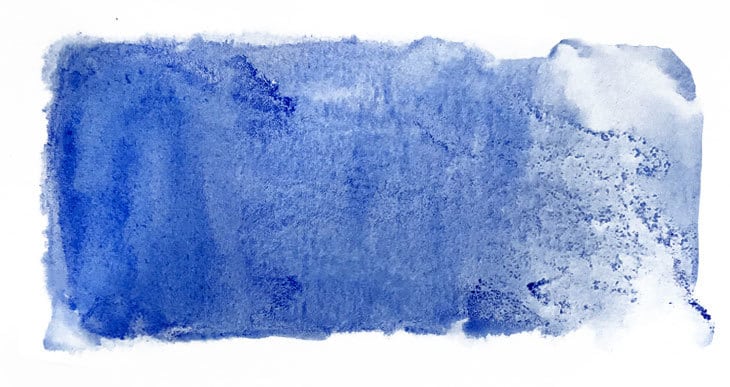 All you ever wanted to know about Watercolor Granulation

​Have you ever noticed how watercolor paints behave differently ? Some colors produce a smooth even wash, but others seem to have a life of their own, creating amazing textured patterns.

When you play around with watercolors for a while you’ll soon notice this interesting aspect of watercolor painting.

Don’t worry, there’s nothing wrong with your paint !

One of the most beautiful characteristics of watercolor is the surprising textures it can produce. And granulation is one of the traits that adds incredible texture.

But what is a granulating watercolor ?

Watercolor granulation results from the type of pigments used in the paint formula. Some pigments tend to cluster together creating uneven mottled washes. Granulating watercolors produce delicate textures because of the characteristics of their pigment particles.

Personally I like the expressiveness produced by this effect. The subtle textures created by granulation is something unique to watercolors !

Some watercolor artists prefer smooth even colors and do all they can to avoid granulating paints. Others exploit this effect to produce beautiful dappled effects in their artwork.

Whatever your preference, this is a characteristic worth getting to know !

Pigments are the basis of the color appearance in our watercolors.

In the past, artists used organic substances to provide pigments for their paint. These natural pigments are the origin of some of the poetic paint “names” we recognize today, (names such as Alizarin, Sepia, Gamboge etc.).

Today the majority of pigments used in paint are man made (known as synthetic organic pigments).

Many synthetic organic pigments form clumps during manufacturing. These clumps can be broken down by milling before the pigments are made into paints, but not all pigments are equally as easy to grind. As a result the size and shape of pigments varies slightly from one paint to another.

As a general rule, small fine pigment particles will produce less granulation, and these watercolors produce a flat and smooth painted surface.

Larger, heavier, irregularly sized pigments will cause more granulation and these can bring about some wonderful mottled textured effects.

Obviously, given the vast range of different paints, the size and shape of pigments is changeable from one tube of paint to the next. As a result the degree of granulation differs quite a bit.

The mottled textures of granulation can be observed on all types of watercolor paper. On smooth hot-pressed paper the pigments tend to do as they please and move around randomly until all the water evaporates. On cold-pressed or rough watercolor paper the dispersion of pigments is slightly more even, and the pigments tend to fall into the low crevices and valleys of the rough paper surface.

Remember, you can vary your choice of paper according to the effect you’re trying to achieve.

As you’ve probably gathered by now, whether or not your watercolors granulate depends very much on the type of pigments which comprise the paint. But the brand and grade of paint can also influence the amount of granulation, since the formula varies a lot between manufacturers.

You will also find that cheaper, student grade watercolors will granulate less because their paint formula tends to contain less pigment (pigments are expensive, so lower quality paint uses less of them).

But generally speaking, certain colored pigments have more sedimentary qualities than others.

For example, finding red and yellow hues that granulate is really hard. Whereas blues and purples, have a good range of granulating colors.

Below is a list of some common granulating watercolors (non exhaustive).

Finding blue sedimentary colors is pretty easy. A lot of the generic paint names of artist quality paint use the same pigment in their paint formula, but it is worth checking to be sure.

French Ultramarine is probably one of the most commonly used warm blues and is very granulating. Ultramarine Blue falls into the same category. Prussian Blue also tends to granulate quite a bit. A medium and warm hued blue would be Cobalt Blue.

Granulating reds and yellows are pretty rare. The only one which seems to come close is Perylene Scarlet which is a medium semi-transparent paint. About the only way to get granulation in reds, is by using the Granulation Medium (see below). It takes some experimentation, but you can achieve some dramatic granulating texture effects this way.

Depending on the kind of red you need, you can also try mixing a non-granulating red with another granulating color such as purple or an earth hues. Colors such as Cobalt Violet, Ultramarine Red (actually a purple hue) or Burgundy Red Ochre and Quinacridone Burnt Orange could do the job.

Yellows are similarly difficult to find. Again the only yellow hue I know of is Nickel Titanate Yellow which is a light hue and does not really granulate a lot. If you’re mixing a more neutral yellow you could try French Ochre or Yellow Ochre. Also Buff titanium mixed with a non-granulating yellow paint may do the trick !

Earthy browns are also among the paint colors which have good granulating properties. Some of my favorites include Raw Sienna, ​Burnt Sienna and ​Burnt Umber. You can find some quite good black sedimentary paints. Payne's Gray and Ivory Black granulate. But the most dramatic granulating black I’ve found is Hematite Genuine from the Primatek series by Daniel Smith. Like a lot of artists, I’m a fan of Daniel Smith watercolors. They have a huge range of colors to choose from and have a particularly good choice of granulating paints. At the time of writing I counted 111 granulating paints in their “Extra Fine Watercolor” range.

​This list does not include the Daniel Smith Primatek series which contains an additional 32 interesting granulating watercolors.

Some of you may be wondering how to make your watercolors granulate even if they aren’t sedimentary ?

This is a liquid solution which you can add to your watercolors, either by diluting your tube paints directly with the medium, or by mixing on the paper, by brushing medium onto fresh washes.

The most dramatic result are obtained by using this neat from the bottle. You might find the results too strong.

Instead you can try laying down a very, thin wash of a granulating medium first then put on washes of color layered on top of the granulation medium. This usually retains the granulating effect without sacrificing the color you want or producing excessive textures.

Take care when using granulation medium not to mix it with your normal palette, or you may end up contaminating all your colors with granulating fluid. The best idea is probably to keep your color mixing separate when you want to use this product.

This product also seems to increase the drying time of your paintings, so you'll need to be patient!

How to get granulation effects with watercolor

So how do you make your watercolors granulate.

Personally I get the impression that granulation is better on cold press or rough paper, and also it shows more if the paper is dampened. I often brush a little water on the paper, then add the watercolor mixed with more water. This allows the particles to float until the heavier particles clump and do their thing on the paper.

One method to force granulation is to add a lot of water to your pigment, then go back and charge your wash with more pigment.

Another tip is to keep your paper flat and horizontal. If your paper is tilted the pigments run downward under gravity and the granulation effect is lost.

Often, when you get backruns and blooms the granulation effect is even more exaggerated.

If you don’t have many sedimentary watercolors and as an alternative to granulating medium, my best advice is to try creating your own textures. Try splattering water onto your paint using a hard bristled brush or a spray bottle filled with water.  You can also scatter salt or rice onto your paint, although I would be careful with salt in time the paper will degrade,

Just get some scrap paper and give it a try !

Are your watercolors granulating ?

Why not check you own colors to see which ones granulate !

Depending on which brand of paint you use, identifying which of your watercolor paints have granulating characteristics is more or less simple. Sometimes you’ll find this kind of information on the labels of the paint tubes. Alternatively you can download the color chart of your chosen brand where you’ll find all the properties of each paint. Here for example is what this looks like on the Daniel Smith watercolor chart: The granulation element is generally indicated Yes or No (Y or N). Some brands such as M. Graham use a “G” to indicate granulation.

​The same for Schmincke whose color chart you’ll find here...

For Winsor & Newton, finding this information is slightly tricky. You have to consult the individual paints on their website to find out whether they granulate: see this page​ ...

For Sennelier, I wish you the best of luck - I couldn’t find this information anywhere !

If you can’t find this information for your own set of watercolors, you can use observation to help you determine their characteristics. If you examine your mixing palette after your paints have dried, you should be able to see clear granulation patterns from colors that are sedimentary. Try observing your palette occasionally to judge which of your colors fall into this category.

Granulating paints can be more difficult to control...

After all they seem to have a life of their own !

Beginners may find this kind of paint more of a challenge, but if you’re looking for amazing textures in your artwork, then it is certainly worth investing some time playing around with granulation... Watercolor with Pen (Tips and Tricks for Beginners)

Watercolor Practice Exercise (Do you Think YOU Can do This?)

Hi, I'm Anthony.
So you're ready to make a dent in the world of watercolors ? Good for you.
My love affair with painting began when I was a kid. But this blog isn’t about me...
I started this website to share everything I've learned about watercolors in the hopes that it might help & inspire others to pursue the same creative voyage.
You're welcome to follow along...
Read more About Me... 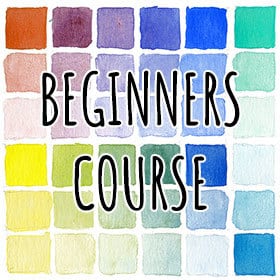 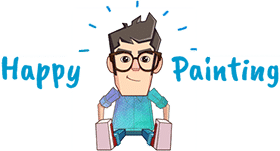 * My articles may contain the occasional affiliate link, which can help me earn a small commission at no extra cost to you. Thank you!

Any cookies that may not be particularly necessary for the website to function and is used specifically to collect user personal data via analytics, ads, other embedded contents are termed as non-necessary cookies. It is mandatory to procure user consent prior to running these cookies on your website.